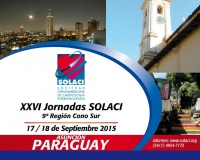 Dr. Rodrigo Abreu won the prize  "to the better case" in the "Contest of Cases for Young Cardiologysts" that took place during the Paraguay 2015 Sessions, which were sponsored by ABBOTT Vascular.

The prize consists in the economic coverage to asist to the SOLACI Congress 2016, in Rio de Janeiro, Brazil, including air ticket, acommodation and registration. ¡Congratulations!